Jab We Met-- When I fell for Bollywood. And Shahid Kapoor. 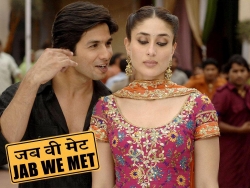 Jab We Met came out in 2007, starring Kareena Kapoor and Shahid Kapoor, and directed by Imtiaz Ali. It was a big hit in India, as I understand, but it was four years before I ever got wind of it. This is because I didn't watch Bollywood. I had heard of it. Remember that exchange in the Muppet Movie?

"Gonzo: I always wanted to go to Bombay, India, and become a movie star.

Fozzie: You don't go to Bombay to become a movie star. You go where we're going, Hollywood!
Gonzo: Sure, if you want to do it the easy way.

I had a notion that it was silly and involved dancing. A big part of this impression I had was from the "Benny Lava" video  which made the rounds on the internet a long time ago. Now that I have done some exploring in Indian Cinema, I can tell you that that is not actually from a Bollywood film, it's from a Tamil film (Tollywood?). And I want to watch that movie now...

So, in 2011, I was putting my nursing baby to bed, which involved a routine in which I sang to him and nursed him, and then, when he was basically asleep but still nursing, I would turn on the tv and watch a little something until he let go. I like foreign films, and since I speak Japanese and have lived in Japan, I have a particular fondness for a good Japanese film. I also lived briefly in Taiwan, and every now and then I pretend I'm going to try to bring my Mandarin level to something above that of a two-year-old. Now, if you have Netflix, you know that the program keeps track of what you watch and has rows of suggestions for you based on your viewing history. Apparently, Bollywood fits in some "Asian foreign film" rubric for them, because after watching several Japanese and Chinese movies, Jab We Met showed up in my recommendations. On a lark, I decided to check it out.

I'll be honest. The first thing to keep me interested was Shahid Kapoor as Aditya. I didn't mind watching him wander, depressed, through the city during the opening sequence. Acting depressed does not impair his considerable good looks. I didn't mind it one bit. And then he boards a train and Kareena Kapoor shows up as Geet, armed to the teeth with effervescence, and... I kept watching. I watched Geet try to take Aditya under her wing, end up missing the train as a result, and turn on him to demand he escort her home. I watched some ridiculous "special effects" involving a toy car that left me scratching my head, but I kept watching. I watched them arrive in Bhatinda and get welcomed by her large, effusive family. And then I saw Nagada Baja. 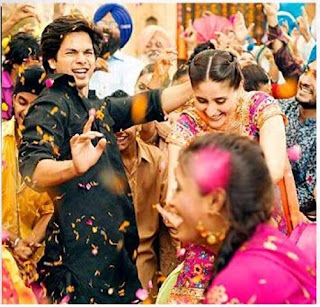 That was when I was really and truly sold. To say it was fun to watch doesn't quite capture it. It was joyful! They were having fun performing and I was having fun watching it and I hadn't felt quite so satisfied with a movie experience in a long time. That was it. I was entranced. And I was hooked.

I loved the rest of the movie, too, extending broad forgiveness for slight flaws it might have because of the deep pleasure it gave me. I recommend this film to everyone. If you haven't seen it yet-- find it. Watch it. Love it. My own copy is lent out at the moment to a friend who had never seen a Bollywood film before.

After I met Jab We Met, I had two thoughts. "Why have I never tried watching Bollywood before?" and "I have to see more!"

Add comment
Load more...
Newer Post Home
Subscribe to: Post Comments (Atom)
Through the magic of streaming and renting dvds through the mail, I have discovered Indian cinema. Bollywood, where have you been all my life? Join me while I try to make up for lost time- there's a whole history of Bollywood to delve into!