I watched Hazaar Chaurasi Ki Maa (The Mother of 1084), which won the National Film Award for Best Feature Film in Hindi in 1998. 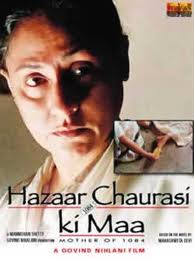 It wins an award from me, too. The Queuing Up Bollywood Award for the Most Depressing Hindi Film Watched Thus Far. Congratulations!

This is not a small thing. I have watched quite a few depressing Hindi films. This is by far the most unrelenting, although it does end on an uplifting and hopeful note, mingled with the resonance of another onscreen tragedy. It is unique, however, in being completely song, dance, and subplot-free.

And this is not to say that the movie isn't good. It is a well-made, atmospheric film. The performances throughout are excellent. Apparently, this was Jaya Bhaduri Bachchan's comeback film after 18 years off the screen, and I admire the very quiet fire of her performance.

This is the first film I have seen that centers about the Naxalite movement, something which a year or two ago I had never even heard of. "Naxalite" is a general term for militant communist groups in India, groups that mainly derive their philosophy from Mao, and their name from the town Naxalbari, where the Communist Party of India was involved in a violent uprising. The impression that I get is that there are many different groups with a great deal of variation in practices and aims that are lumped under this term "Naxalite." The Naxalites in this film are idealistic young men dreaming of a more egalitarian future for their country, not unlike the young revolutionaries in Les Misérables, actually. 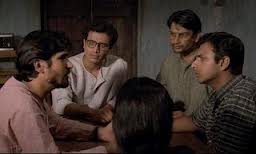 I have read that some Naxalites resort to or even depend on violence to promote their aims, but in this film the idealistic Naxalite youths are the ones subjected to violence by those who disapprove of their aims, including the police.

The film is set in the 1970s, and opens with Jaya's character, Sujata, being summoned to identify the body of her son, Brati. Her husband (played by Anupam Kher) and her other son immediately go into cover-up mode, alerting the audience that there is something other than a simple crime involved here, and Sujata must go to the police morgue alone. She hadn't had any idea what her son was involved in, and is despondent and confused, which the viewer is also. The viewer trails behind her for the rest of the film as she decides to find out just what happened.

I am always fascinated by how nice communism sounds as a philosophy. There is a flashback scene where Sujata is realizing there were hints of what was going on that she didn't pick up on. In this scene, Brati is arguing with his father, who asks him why he is hanging out with these disreputable people when he comes from a fine, well-to-do family. Brati proudly replies that he wants his friends to be able to have what he has, asserting that they are "no less" than he. His father has no reply. It sounds lovely, doesn't it? And this film has a bit of a feel of wondering why this lovely sounding philosophy inspires such hatred, and comes to such violence and grief.

I do feel that this is one film I did not entirely understand. There was so much in it for which I simply don't have the background required to get all of the implications. I don't know enough about Naxalites, about what they've done and what has been done to them, about politics in India in the 1970s, about how Indians feel about where India is now and how that relates to earlier policies. But I could feel this mother's pain, and her confusion about why her son came to the end he did, and her slow realization that there are people around her suffering and struggling that she hadn't really notice before, and that her son had wanted something better.

One thing I found absolutely beautiful was the portrayal of how Sujata comes into her own, stops being under her husband's thumb, and finds a purpose in her grief. I also found it interesting that, in the not entirely bleak ending I alluded to, her husband has also changed as a character, for the better, in response. The film seems to be making a hopeful statement that the leaders of a country might change for the better when their citizens decide to make a stand for what they believe in. As I said, it's a depressing film, but not without hope.