Saawariya is a film by Sanjay Leela Bhansali, who also did one of my favorites, Hum Dil De Chuke Sanam. Saawariya is a dream-like, fantasy film set in an entirely fabricated world, and it has Bhansali's stamp of visual artistry on it. 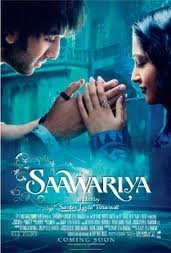 There is a lot of beauty in this movie. However, sometimes perhaps Bhansali forgot the difference between creating a painting, or a series of paintings, and making a movie. In places Saawariya was so slow it was like watching a painting dry, and in other places the threads of the story frayed until it entirely ceased to make sense.

Saawariya is set in a make-believe world, in a city that is not any real city, just a beautiful backdrop for the story. Ranbir Kapoor plays Raj, who falls in love with the beautiful Sakina (Sonam Kapoor) who is pining for her own heart's desire to return to her (her absent love is played by Salman Khan, in a bit of a cameo here). Raj meets Sakina walking through the city and grows obsessed with her. She first wants nothing to do with him, then befriends him, but tells him she is waiting for the man she loves to come back. But he is sure, because his feelings for her are so strong, that she belongs with him. All that remains is to convince her, right? 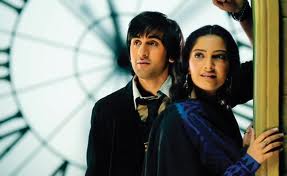 There is also a small role here for Rani Mukerji, who performs the best dance number in the movie. (Yay Rani!) 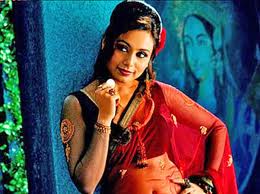 There are some similarities between this movie and Hum Dil De Chuke Sanam, but I much prefer HDDCS. Now, HDDCS is not a perfect movie by any means. It is filled with melodrama and suffers from some poor directing choices in places. But it is undeniably alive, and so heartfelt, whereas Saawariya feels distant and a little cold. I didn't feel I really knew any of the people in the movie by the time I got to the end of it. Nor did I really care about them or the choices they ultimately made. This is a sharp contrast to my reaction to HDDCS, which I was very invested in. Saawariya can also be, quite frankly, very dull in places. There is a lot of the young couple wandering slowly around the beautiful set, talking, but not getting anywhere with it.

But I did discover something interesting when I watched Saawariya. I discovered that I don't much care for Ranbir Kapoor, at least when he performs in an exuberant or quirky role (I did like him very much in Rocket Singh, Salesman of the Year, but that was a very low-key performance). Which goes a long way toward explaining why I couldn't get into Barfi, in addition to what I mentioned in my post about it. He is very talented and performs very well, which is why I didn't immediately think it was his performance putting me off at all, but now having seen both Barfi and Saawariya it clicked for me: he sells it, but I don't like what he's selling. When he tries to turn on the charm, it turns me right off. My working theory is that he's too technical. He is a Kapoor, after all, part of that powerful Bollywood dynasty, and has been steeped in it his entire life, no doubt. He knows exactly what he's doing. He is a fine-tuned Bollywood-performance instrument. But I don't feel any heart behind it. 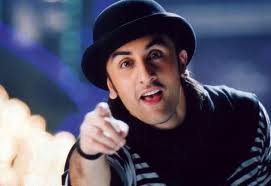 Well, maybe I'll see something later that will change my mind!
Posted by Annie at 10:18 AM