After falling head-over-heels for Jab We Met, it seemed a logical way to find more Bollywood movies to love would be to check out the filmography of that charming Shahid Kapoor. I liked him so much in JWM, he was sure to lead me to many more fine film experiences, right? Right?

The first one I watched was Chance Pe Dance, which was entertaining enough, but, especially considering I was searching for something as good as JWM, a disappointment. Also, for a movie with "dance" right in the title, it is surprisingly light on dancing. And the dancing we do get is the kind of hip hop designed to show off Shahid's muscles.

You see? Not that his physique is unimpressive, but I prefer some impressive choreography. And the dancing was all just so... Western. So that was disappointing, but the story is engaging enough, about a wannabe movie star trying to make it in Bollywood, and his misadventures on his way to the top. There is romance, there is the tension between honoring family commitments and chasing your dreams, there is professional betrayal. There is also a major sideways step in the plot involving Shahid taking a job teaching dance at a school when he can no longer foot his bills. But then there is a happy ending with Shahid looking fantastic on a red carpet. I was entertained but not riveted.


To be fair, I must mention that my 10-year-old son says this is his favorite Bollywood movie. It's true that he has only watched six, but all of the other five that he has watched (Veer-Zaara, Rab Ne Bana Di Jodi, Dil To Pagal Hai, Dil Bole Hadippa! and Billu Barber) I would put ahead of this one. So I asked why, and he said, "It's the first Bollywood I got to see all the way through."  There is something fascinating about this phenomenon; I've heard others say the same thing. Others who have had wider experience in Bollywood cinema. Apparently, if you are destined to like Bollywood at all, the first film that brings you to this world will hold a special place in your heart forever.


On to Kismat Konnection...

Ok, I think I almost gave up on Bollywood after Kismat Konnection and wrote Jab We Met off as a fluke. The premise is that Shahid is a struggling architect who can't catch a career break. He visits a psychic who tells him he has to find his lucky charm, and then as long as his charm is with him everything will go right.
Well, his lucky charm turns out to be a person- yes, a woman (naturally). Not only that, she is someone he only recently met but already managed to antagonize. So he has to get on her good side and convince her to be there for all his business interactions. And of course they fall in love. This was set in Toronto, and was my first introduction to what I have come to find is a not uncommon Bollywood phenomenon: atrocious acting by white characters. Just extras, but still. I don't know where Bollywood filmmakers find these people. After all, Toronto has a pretty vibrant film scene and is probably stuffed to the gills with hopefuls who would love to be cast in a movie. Surely they could find white people who don't act like they've just been inhaling paint thinner? The good news on this score is that, according to the movie, it is fairly easy to live and work in Toronto while pretty much only interacting with Hindi-speakers.

All-in-all, watching this movie was not such a great experience. But Shahid did well with what he had to work with- he really can act! I remember one scene in particular, when Shahid and his lucky charm are starting to fall in love. Shahid is staring at the heroine while he thinks she can't see, and he looks so sweet and wistfully besotted. But still, this movie had a mega-dose of the Bollywood corniness without its larger-than-life charm, and without any of the beautiful costumes or scenery. And really, without the heart and charisma that just makes it work. Also, the music was so forgettable that I've literally forgotten it. I'm assuming there was some, but I don't remember it at all.


And then I found Chup Chup Ke. Not only Shahid, but his Jab We Met co-star Kareena Kapoor as well! 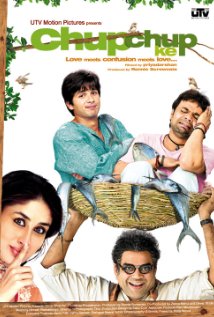 I actually love this movie a lot, but oddly enough, the first time I tried to watch it I gave up and turned it off. There is a particular reason for that, though. The movie involves two bumbling fisherman characters (on the cover above), and they provide a lot of physical comedy. At the point that I turned it off on my first go-around, it involved one of them mistakenly getting a tooth pulled (without pain meds).   I feel vicarious pain too acutely, I suppose, because not only was that not funny to me but it made me feel faintly sick. Perhaps I've just had one root canal too many. But for some reason I kept thinking about this film, and the beginning had intrigued me, so after a little interval I went back and tried again, using the special technological feature known as "fast-forwarding" to avoid the scene I had so disliked the first time.

It is a lot of fun! But a bit strange, yes, definitely a strange story. Shahid is a would-be entrepreneur who has racked up a lot a debt from various failed enterprises. He decides to commit suicide so his family can collect life insurance on him and escape hounding by the debt collectors. He throws himself into the ocean, but of course, as Shahid is far too handsome to die, he is fished up by the aforementioned fishermen and ends up getting his lot thrown in with them. Oh yes, and he pretends to be deaf and dumb (there's a reason!). The fishermen have their own problems with debt, and Shahid and one of the fishermen end up working in a rich family's house as a consequence. In that house lives Kareena, who is mute, although not deaf. I won't try to explain more, because the plot is on the convoluted side and will suffer from being laid out for viewing out of the context of the film itself. But watching it is a lot of fun. Romance! Angst! Love triangles! Misunderstandings! Friendship! Family ties! AND (drum roll please) Shahid Kapoor dancing! My husband came in while I was watching Dil Vich Lagiya Ve, and even he remarked, "Well, that Shahid Kapoor guy certainly can dance." Yes. Yes, he can. Anyway, I recommend giving Chup Chup Ke a try!


Coming up in the next Searching for Shahid installment- Vivah, Dil Bole Hadippa! and Milenge Milenge. What do you think of Shahid Kapoor's filmography?