I lost my heart to Hum Dil De Chuke Sanam

I'm going to interrupt the account of how my early Bollywood experiences were all colored by going ga-ga for Shahid Kapoor (which, upon reflection, is actually a tad embarrassing, but hey, it's what happened) because my recent Amazon order came in, including Hum Dil De Chuke Sanam. 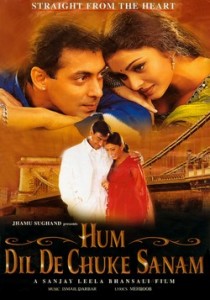 Yes, this means I liked it enough to buy it. I re-watched it last night, and I made the husband watch it with me. I only do this with Bollywood I feel strongly about. He's willing to watch select Bollywood films with me. It helps to be able to say, "Aishwarya Rai's in it!"


I suppose I should try not to gush too much about this movie, but I'm not sure how successful I will be. It is a beautiful, beautiful movie. There are times, especially in the first half set in India, that I feel that each frame could be a painting, they are all so beautifully composed. The songs are fabulous and worth the price of admission, so to speak, all by themselves. Aishwarya Rai is gorgeous, but more than that, her performance is arresting. Salman Khan, her first love, is a wonderful fit for his role here. I am not a huge fan of Salman. Admittedly, I haven't seen all that much of his work yet, but I was told Dabangg would make me a fan if anything would and... it didn't. That's an entry for another day. But coming back to watch this again, I remembered his silliness and the exuberance of his performance here, which easily threatened to spill into Over-the-Top territory, and wondered if I would find it hard to bear a second time around. On the contrary, I enjoyed his performance even more this time; even the weaknesses seemed to fit his character. And I may still be a newbie, and I certainly haven't seen even a fraction of Salman Khan's or Aishwarya Rai's work (although I've seen more Rai than Khan), but I would be very surprised if I ever run into a performance from either of them that surpasses the gutting vulnerability of the Tadap Tadap song, when Salman is made to leave. Watch it. I get chills. Every. Time. (Viewer beware, though: at the end of this song picturization, Aishwarya cuts her wrist in despondency and blood is involved. Stop at 3:00 to avoid.)

Now, I had never seen Ajay Devgan before this film. He has an appealing manner, though I don't find him strikingly handsome.

His performance here is excellent, and again, like Aishwarya and Salman, he allows a vulnerability into his character that makes you ache for him. He could easily be the chump character who loves silently and plays the martyr, but his inner struggle makes him more complex than that. 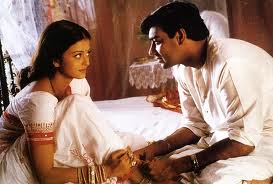 There are certainly weaknesses in the film. The second half isn't nearly as visually beautiful as the first, for one thing. The scene shifts to Italy... supposedly. It's not Italy, and very obviously not Italy, at least to Westerners. I found this very irritating the first time around, and took care to warn the husband that it was coming. And once they are in Italy, we are regularly assaulted by the Atrocious Acting by White Extras that I think I have spoken of before. By the way, I was reminded what great fun it is to have someone watch with me. Instead of inwardly cringing at the unintentionally funny moments (it has its share of them, despite being such an excellent film) we could laugh and/or groan together. I really enjoyed that. Maybe I need a Bollywood-watching partner. But I digress.

Hum Dil De Chuke Sanam has a happy ending, but it's not a simple happy ending. I believe that at its heart, this film is about finding that life can still be beautiful after heartbreak, and that, although you can't go back (no matter how much you may wish to!), you can open your heart and go forward. It's also about the raw power of love, about how it can hurt, change, transform, punish, elevate, and astonish us. But never leave us untouched. 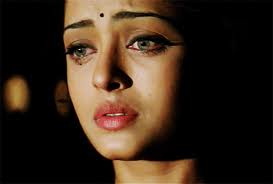