Before I take a look at the last two Shahid Kapoor films my semi-obsession led me to, let's talk about Dilwale Dulhania Le Jayenge, which I watched somewhere in the middle of all these Shahid films.

It began to be clear that, as much as I love Shahid Kapoor and think he is terrifically talented, his filmography is something of a mixed bag. After awhile it occurred to me that I should maybe try another avenue for finding fantastic Bollywood. To the internet I went, and searched for something like "best Bollywood movies." People disagree, of course, but I began to notice one title coming up again and again. A long title in Hindi that I found, at first, completely impossible to keep in my head. Dilwale Dulhania Le Jayenge. 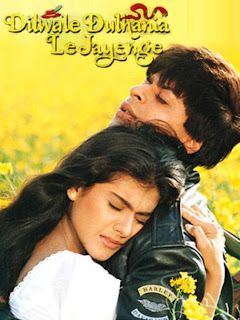 Before looking into this film, I had never heard of Shah Rukh Khan. Now that I have waded a smidgen further into the sea of Bollywood, it seems incredible, but it's true. I had never heard of Shah Rukh Khan. If any readers are uninitiated or newly curious about Bollywood, Shah Rukh Khan is a megastar- quite possibly, by sheer number of fans, the biggest movie star on the planet. Just barely having dipped my toe into Bollywood, I did not know this. But people on the internet were gushing, absolutely gushing about this movie. And I read that it is the longest running film in Indian history. According to the wikipedia entry, as of this writing it is still running in Mumbai. It first came out in 1995. Can you imagine a movie in the US staying in theaters for over 15 years? I was intrigued by reports of this phenomenon of a film.


So I watched it. And I liked it. I did like it. I enjoyed it. But, perhaps not unsurprisingly, after having found it because it was touted as being one of THE BEST BOLLYWOOD MOVIES EVER, and after all the anticipation... it didn't seem THAT amazing.

And I was bemused by SRK (that's Shah Rukh Khan, don'cha know). I thought he was unbelievably annoying for the first half of the film, and only started showing some charm in the second half in India, charm which was still interspersed with obnoxious interludes. I could see- it was plain and obvious- that we were supposed to find his manic antics charming, his habit of talking really fast and over the top of people funny, and his entire manner rakish and endearing. But I must admit that it turned me completely cold. Also, and this is another thing that I find odd to remember, I thought he was really ugly. *ducks and runs away from legions of angry SRK fans*

I did! I thought he was "homely as a mud fence," as my mother used to put it. Now, in the second half of the film I began to see his charm. I had been thinking, as I watched, "THIS is the biggest star in India?" Then came the song Tujhe Dekha To, and the romancing started in earnest, and I began to get a glimmer of the appeal. His eyes are very expressive. He can do the lovey-dovey eyes like nobody's business. He is a master of being besotted. 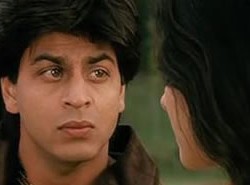 
So no need to fear- eventually I joined the fantastically huge brigade of Shah Rukh Khan fans. The man has been blessed with heaps and bags of charisma. But it wasn't DDLJ that turned me into a fan of SRK. That honor belongs to Rab Ne Bana Di Jodi, bridged to by Dil To Pagal Hai. But that's a topic for another day.

So the story: Raj (SRK) and Simran (Kajol- another very famous Bollywood luminary whom I hadn't heard of before this film) have grown up in London but are Indian at heart. They meet as they take a trip through Europe with groups of mutual friends after graduation. Simran first hates Raj, but then she falls in love with him, which is a problem because after the trip she's going to India with her family and marrying her father's best friend's son, whom she has been promised to since birth. Raj follows her to India and devises a plan to win her father over and marry Simran himself. 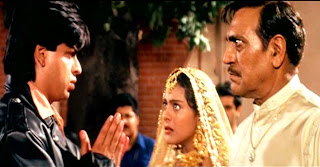 It was interesting to see how adamant Raj was the Simran's father give his consent. Simran actually asks him to run away with her, but he insists that this is not what Indians do, and he will only marry her with her father's permission. This is totally foreign to both my Hollywood experience and my actual experience (I didn't let my husband ask my father for my hand in marriage, only his blessing, because I thought it would be disingenuous when I knew I would marry him no matter what my parents said). And therefore fascinating.

DDLJ won me over in the end, just like Shah Rukh did. If you want to get into Bollywood at all, this really is a must see. It is referenced over and over and over again. Just try not to let Raj annoy you in the beginning, open yourself to romance laden with traditional Indian family values, and enjoy the ride! 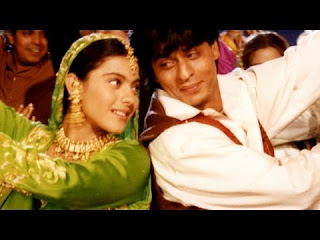