Stopping the moonlight- My attempt to watch Chandni

When Bollywood works for me, it is a fabulous cinematic experience. It may make my heart sing or crack, but either way, it's worth the investment of my time. But let's face it: there's a reason Bollywood's reputation isn't entirely sparkly with praise from across the globe. It doesn't always work. Sometimes it is flat, or dreadful, or flatly dreadful.

In other news, I tried to watch Chandni. 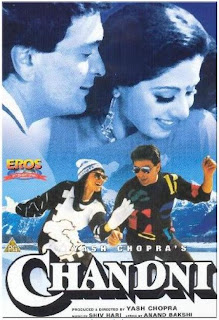 I think Chandni has been in my "Netflix recommends for you" row since I first watched a few Bollywood films. I saw it there but it never caught my eye, what with the surfeit of Bollywood available, enough to look into it. However, it has been slowly and inexorably looming larger in my awareness for some time. I learned, because it is used in many song lyrics, that "chandni" means "moonlight." And I thought, "Oh, that's what that movie title means..." I gradually became aware, watching the song "Phir Milenge Chalte Chalte" from Rab Ne Bana Di Jodi over and over again (many many times- it was the toddler's favorite for a good long time, so the entire family has seen this one countless times) while also reading and learning more about Bollywood, that the lyrics of the song are in large part made up of references to other songs and movies. "Oh," I thought, "When he sings 'Meri Chandni,' maybe it's a reference to that film I see on Netflix..." Most recently, with the buzz surrounding Sridevi's newest film English Vinglish, I, well, heard of Sridevi, who plays the heroine (from whose name the title comes) of Chandni and is, according to some internet sources, "a legend."

Moreover, it is a Yash Chopra film! I thought it was time to pull the trigger.

The film starts promisingly, with a dance number by Sridevi, looking impossibly large-eyed, dewy, and winsome. 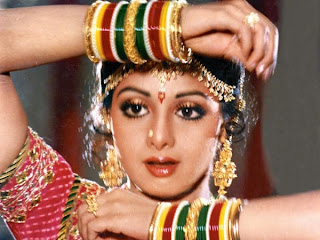 While she is dancing, I got the first hint of something amiss: Rishi Kapoor is there, angling to watch her dance, trying to sneak into the performance although (for some reason) her audience is entirely female (she's dancing at a wedding celebration). I saw Rishi Kapoor in Bobby, and he was fresh-faced and appealing. Chandni is some 16 years later, and he looks flabby-faced and unattractive. (Sorry, Rishi, but it's true. You're looking much more palatable now that no one is trying to make a romantic lead out of you.) They also stuck him in the most ridiculously unflattering clothes. For a futile moment I hoped he wasn't to be her hero, but I also sinkingly knew he was, because there he was, ogling her dancing. From my limited Bollywood experience, being desperate to see or being captivated by a girl's dancing is a sure sign of a sudden and irrevocable plummet into romance. This was not a good sign. But there was the possibility that they could make it work.

It did not work.

After her dance, Rishi's character accosts (assaults) Chandni on the stairs, declaring his love for her apropos of nothing (does she even know who this guy is??) and demanding she reciprocate ("Do you love me? Yes or no?"). At one point, as she tries to slip past him and go back to whatever she was planning to do before he inserted himself into her life, he actually grabs her wrists and twists her into himself, holding her is a semi-chokehold. My eight-year-old daughter was in the room and commented in disgust, "I would never want someone to grab me like that!" And we immediately had a little discussion about how she was perfectly right in feeling that way, about how he was being a jerk and no one should be treated like that, and about how this was an entirely inappropriate way to express affection. Because, wow, Great Jangling Bangles what a hideous way to kick-off a relationship! After she has finally escaped to her room she looks at her wrist to see it bleeding because Rishi broke a bangle when he grabbed her. How romantic.

As the wedding celebrations continue Rishi's character keeps inserting "Yes or no?" accompanied by meaningful looks into his every interaction with Chandni. And how does he finally get the answer he wants? He takes her for a motorcycle ride and scares her by driving fast and recklessly, shouting that he'll stop when she says "yes." So that's how their love affair begins. Under duress. None of this is even slightly ameliorated by any chemistry between Rishi and Sridevi, because I can see none. Later, Rishi shows her his room, which he has wallpapered with various photos of her. She is apparently touched by this disturbing behavior, which was disturbing to me as a viewer.

To make a long story short (too late), I stopped watching during the "honeymoon in Switzerland" dream sequence. I do not have enough free time in my days to permit me to even come close, over the course of my lifetime, to watching all the Bollywood films I might possibly find enjoyable. I'm certainly not going to waste any of my allotted Bollywood hours watching something so joyless.


If anyone out there wants to tell my why I'm completely wrong and Chandni is a marvel of film-making, please feel free!
Posted by Annie at 12:11 PM