So, I found Vivah through the "search for anything with Shahid Kapoor in it" technique, and it was maybe the fifth Bollywood I ever watched. As I look back on finding and watching Vivah, it occurs to me that it's a little odd that I like this film so much. It's a bit slow. OK, more than a bit slow. It is intensely saccharine. It doesn't have the exuberant dance numbers that I enjoy so much. The characters are all unbelievably upright and honorable and nice, except for a token angry character who comes around in the end. It's just very... sweet and slow. 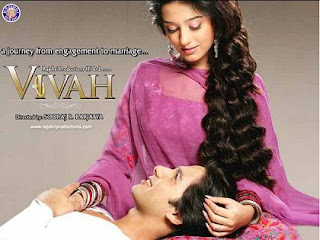 BUT Shahid Kapoor and Amrita Rao are so ridiculously beautiful that you CAN'T LOOK AWAY.

Also, I found it very intriguing to see such an idealized depiction of traditional arranged marriage. With the disapproving fascination Westerners have for the concept, we tend to think we understand a story about fighting against an undesired arranged marriage, but this is a movie about an arranged marriage that works just exactly the way it's supposed to, with everyone happy and no conflict.

The story is about how Prem and Pooja meet when their families decide they want to match them together. The fall in love in that brief first meeting, agree to the marriage, and the movie follows their engagement period as they get to know each other better. The night they are supposed to marry, there is a terrible accident that leaves Pooja's family worried that the marriage won't happen. But love triumphs, and I don't consider that a spoiler, because it is made obvious the entire way through that only a picture perfect happy ending would be allowed here!


Shahid is excellent, utterly charming and adorable. He fleshes out a pretty one-dimensional character with heart and soul. Amrita does pretty well with what she is given, as well, and she is just stunning. I thought their chemistry was wonderful, and they kept up a pretty sizzling sense that both were greatly anticipating their wedding night. 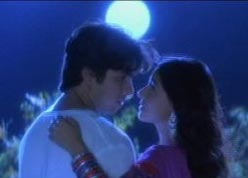 I also loved getting to see the full wedding costumes and all of the pomp and preparations involved. Shahid looks fabulous all decked out in wedding clothes. Why do we dress our men so uninterestingly in the West? Dark suits for everything. Yawn. 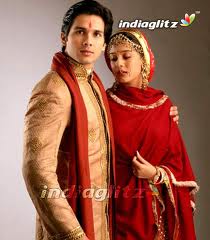 I thoroughly enjoyed Vivah. But I would never have the husband watch with me, since the appeal would be completely lost on him, and he may well take to hiding whenever I suggest watching a Bollywood film. If you are disinclined to enjoy cloying sweetness, a lack of action, and/or a slow pace, the appeal may well be lost on you, too. However, if watching Bollywood for interesting cultural tidbits appeals to you, or if you could happily stare at Shahid Kapoor being adorable for three hours regardless, take a gander at Vivah.

Next up, one of my kids' favorites. Dil Bole Hadippa! 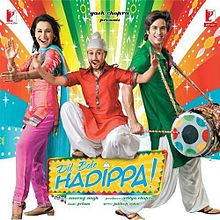 I searched for Shahid and found Rani Mukerji. This was my first exposure to Rani, and when I watched this, I had no idea what a big star she was. I was actually somewhat surprised that Shahid has relatively little to do, but this is really Rani's movie. The story is that there is, in the Punjab, a young girl who is fantastic at cricket, and dreams of playing for India and winning the World Cup. (Or something... I think they said it was the World Cup, but I know next to nothing about cricket, and before watching this movie all I knew was that it was a game that people in Britain and India like.) But when she wants to try out for the team, they won't let her because she's female. So she disguises herself as a man and gets on the team, which is coached by Shahid, a big shot cricket player from London. Shahid has also met her as herself, and she claims her male persona is her brother, and romance becomes involved as they are gearing up for a big game against their rival team from Pakistan.

Rani gives an exuberant performance and I love her expressions, but I don't think she really fits her role here, in that it is hard to believe anyone buys her disguise. Even my kids asked, in genuine confusion, "Why can't they see that she's a girl?" To which I could only respond, "Well... she has that fake beard..." 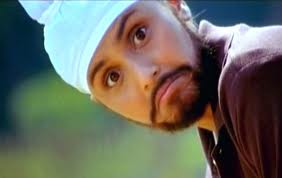 And they gave me pitying looks that made it clear that they were sorry to think I could be taken in by such a thin disguise. And they have a point.

This movie is not going to change anyone's life, but it's a very fun watch. There were some elements that I have since heard others describe as overdone that I really enjoyed, although perhaps because I didn't have a lot of Bollywood experience when I watched it. The patriotic Indian girl defending her country in the face of snobby Londoners... the "we can be friends with Pakistan" message... the London-raised Indian character (Shahid) learning to appreciate his cultural roots... apparently these are recurring themes that some have grown quite tired of, but I was not too jaded to enjoy them! There was also a reference to the staggeringly popular Dilwale Dulhania Le Jayenge, but, well, I hadn't even seen it yet, and so the reference went right over my head.

As for the music- I love it and the kids love it! For awhile is was the go-to when the toddler needed Bollywood Therapy. (Discowale Khisko is excellent for stopping a tantrum, if you're interested.) 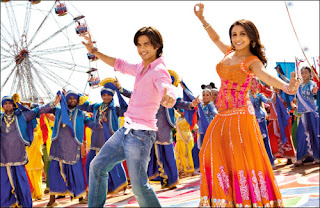 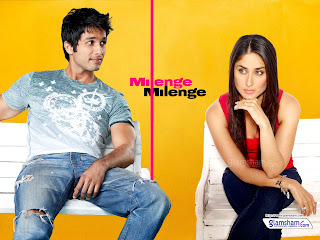 I will tell you right from the beginning- this is not a good film. However, if you are the type who enjoys watching a bad movie because you can make fun of it, this may be a good candidate! It overflows with mock-able scenes.

Just a little taste: Shahid falls in love with Kareena when he and his friends dress in drag (!) so that they can go to a party in the girls' dorm. 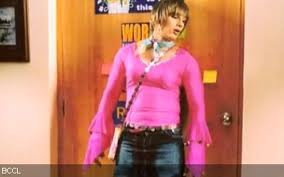 He loses his way and stumbles into her dorm room, where he watches her sleep, entranced by her beauty. Not satisfied with that level of creepiness, he spies her diary and steals it, where he reads her account of how a fortune teller told her the signs that would reveal her true love to her, and naturally he decides to arrange for them to happen so as to indicate himself as her true love. 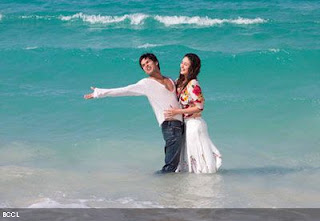 Of course she finds out. She never wants to see him again! He begs her to forgive him. She tells him she'll only take him back if it is decreed by fate, and devises a test whereby they can discover fate's opinion on the matter. WILL THEY END UP TOGETHER IN THE END? 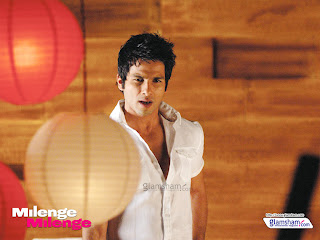 Unfortunately, it is difficult to care. This movie is only recommended if one is on a quest to see every film Shahid Kapoor and/or Kareena Kapoor ever made. Not that anyone would do such a thing...

So far, a bit of a mixed bag for Shahid. Next time: Badmaash Company and Kaminey.
Posted by Annie at 11:47 AM