Bunty Aur Babli is a film I watched to about halfway through and then forgot about for a good long time. I finally watched the rest of it. It is fun but not fantastic, as evidenced by the fact that, well, I forgot to finish it for awhile. 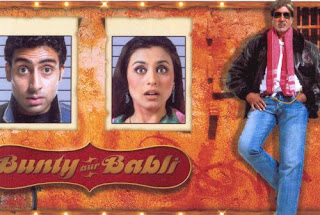 Abhishek Bachchan and Rani Mukerji star as a two big dreamers (Abhishek's big dreams involve running his own business, while Rani dreams of winning the Miss World pageant) from small towns who fall in together and turn to a life of crime when their dreams are stymied. They pull increasingly high-stakes con jobs, relishing both the money and the adventurous excitement.


This movie was, apparently, quite a big hit but I can't get too excited about it. I think part of the problem is that, with films where you are on the side of the criminals, like heist films such as Ocean's Eleven, I'm used to having a definite reason or at least an excuse for siding with the criminals. For example, the guy they steal from in Ocean's Eleven is such a sleazeball that you don't really care that they rip him off, especially when they're so charming and clever about it. But here they seem mainly to be ripping off harmless business owners. If the victims had it coming, I completely missed why. (Except for the con involving the supposed "Richest Man in the World" who thought he could buy the Taj Mahal. That one was pretty funny. Ridiculous, but funny.) Also, Bunty and Babli didn't really seem to have a strong reason to fall into a life of crime. It wasn't as if they couldn't have just gotten jobs, it was just that they found that too boring and mundane in the face of remembering their exalted dreams. For me, however, a reason such as "I'm disappointed that I missed the deadline for the Miss World pageant so now I have no alternative but to steal my way to riches" just falls kind of flat. Abhishek's character was dealt a rude blow, and the scene where he gets even with the guy who did it (which was their first con) was one that, I thought, worked better because he had such understandable motivation and the victim was, clearly, a real jerk. But it still doesn't really explain why they did the next one, although as they kept going it was clear that Abhishek's character enjoyed the notoriety. Better a thief than a nobody, right people? 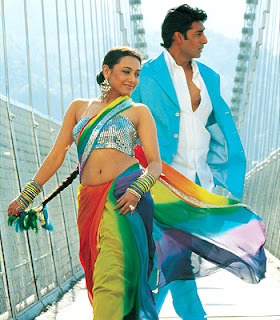 I don't want to spoil the ending, but I will say that, while it doesn't stay so morally ambiguous to the very end, it does seem to cling to the idea that a normal, decent life is extremely boring and sad. Which seems like a slightly rude thing to sell to an audience that will probably mostly comprise people with normal, fairly ordinary lives. Part of watching movies is an escape from the mundane, of course, but I don't necessarily want it hammered home to me, while I'm escaping, what a bore I am!

Amitabh Bachchan plays a policeman who vows to track Bunty and Babli down. He is over-the-top, but he carries it off. Loved him! He and his son clearly enjoy acting opposite each other, and the script took every chance that showed up to make a joke out of the fact that these two are famously father and son in real life. How many times can one character tell another not to act like his father? Watch to find out!

Some of the music was very enjoyable and some of it was ho-hum (but did involve impressively ugly costumes!). I loved the song in the middle, "Kajra Re", featuring Aishwarya Rai, and she was fantastic in it, but it had absolutely nothing to do with anything else in the film. I've heard other people complain before that some songs in some films are unnecessary or make the pace drag, but I've always enjoyed the music and dancing and never before found one to be completely out of place. There always seems to be some justification for it. There have been songs I haven't cared for as much as others, of course, but I've never thought that I couldn't see the filmmaker's reason for using a particular song-and-dance number. But here it really does come out of nowhere, and moreover adds nothing, develops nothing, and changes nothing. Rani isn't even in the scene, and why is Abhishek falling all over this dancer when he's now a married man? And why is this beautiful dancer making such a point of flirting with Amitabh Bachchan's character, who is old enough to be her father (and who, two years after this film came out, became her father-in-law in real life)? What on earth is going on? Weird. I guess the idea is that Aishwarya being gorgeous is reason enough? 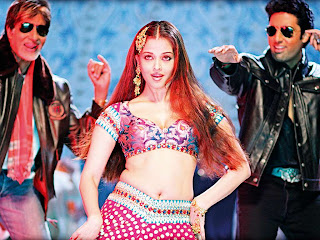 I don't think that anything is executed poorly in this film. It is well done. It just doesn't seem to me to have much to offer. It's fun for one watch, as long as you're not expecting much, and if you're really hankering for a Hindi caper film.
Posted by Annie at 2:04 PM