So, we have come down to the last of the Shahid Kapoor films that I have seen: Badmaash Company and Kaminey. The two films share some characteristics, too. They both deal, in some way, with crime, and in both there is less of the innocence that I find so charming in so many Bollywood films (both films have premarital relationships and onscreen makeout scenes), but Kaminey is a far superior film to Badmaash Company. 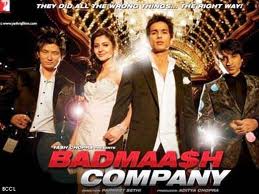 In Badmaash Company, Shahid and a group of his friends decide to form a company, initially set to profit by working around import regulations in India, but then they move to New York to profit from defrauding Americans (why not, right?). 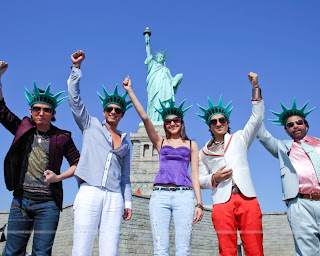 They are successful, make a lot of money, 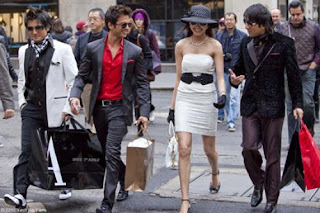 are predictably torn apart by that money and all the trappings of success, and Shahid learns a lesson and becomes a better person. The end.

OK, I'll tell you some more. This is not a terrible film, there's just nothing special about it. The story is predictable... except for the racism, I have to admit I wasn't expecting that. There is racism when the group negotiates with Thai businessmen and there is racism as they decide to move to New York and Shahid, narrating, explains how fun will take advantage of "Whitey." Unfortunately, I don't speak Hindi (I wish I spoke Hindi!) so I don't know how good of a translation of the original dialogue that is, but the fact is they move to New York and commit fraud, ruining some random New York businessman's reputation for no reason, but hey, no worries, he's white.

The music is forgettable and only comes in the background and in "time-is-passing" montages- there is no dancing to speak of. THE MOVIE STARS SHAHID KAPOOR AND THERE ARE NO DANCE NUMBERS. I... I just... I don't understand.

The script is weak and indulges in some preachiness. (Wait, maybe this is a terrible film... but it is pretty entertaining!) The entire cast does a good job with what they have here, but the story is not strong, and in fact is downright implausible in several parts, and the entire film comes across as slightly cartoonish at times.

Shahid's character is pretty much a jerk for a good portion of the film, but he still gets the sweetest scene, when he reconciles with the love interest, played by Anushka Sharma (I love her in Rab Ne Bana Di Jodi!) 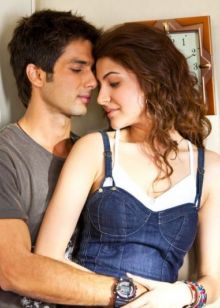 He is so good at being vulnerable and open in relating with his romantic counterparts.

The difference between the quality of Badmaash Company and Kaminey is stark. There is a Grand Canyon-scale difference between the two of them. Kaminey is so intense I wasn't sure whether I liked it at first. I have that experience sometimes with movies that really involve me in the tension. I know it sounds strange, but if a few days later I'm thinking about the film still, remembering certain images that impressed me, and starting to feel that I want to see it again, then I know I actually liked it. That's what I experienced with Kaminey. 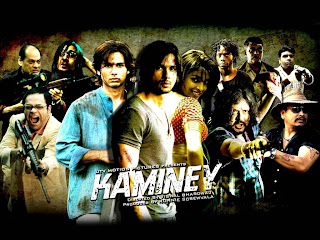 Kaminey is a gritty and dark film (thematically dark and literally dark- there's a lot of shooting at night and in dimly lit places and shadowy spaces). Shahid plays twin brothers, Charlie and Guddu (Charlie narrates sometimes), so we get two times the Shahid, which is nothing to complain about. And he does an excellent job differentiating between the two characters, one of whom is an honest, hard-working sort, and the other a bit of a thug. His performance here is impressive.

Priyanka Chopra plays Guddu's love interest, Sweety, and her performance was brilliant. I've seen a little bit of her before, but she never impressed me until this film. She is not entirely likeable here, which is part of makes her character intriguing. I didn't always like where the writer(s) went with her character, but it was always believably complex and interesting.


The plot involves gangsters, corrupt politicians, dirty cops, and drugs, and how the two estranged brothers both become entangled with all these. It is quite violent at times, but not graphically so. There is great music, and even some dancing, which is very skillfully interwoven with the narrative, not seeming incongruent or tacked-on at all.

The only thing I found a little disappointing was the ending. There was a point where I felt the movie could have ended, and it would have been a powerful, statement-making ending. But it didn't end there, we got kind of a "happy ending" epilogue instead. So that was somewhat unfortunate, but this is still a skillfully made, well-executed film. 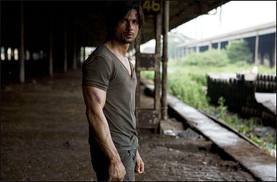 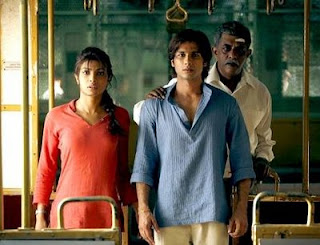 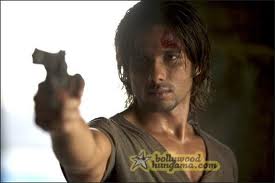 This is not a movie for someone who only likes Bollywood for effervescent romances (and I do love those!). But I think I will watch it again, and see if I can get the husband to watch with me. Vishal Bhardwaj directed, and I now very much want to check out more of his work.

So now the search for Shahid has ended. He remains my favorite actor, and will always have a special place in my heart for being the hero of the film that introduced me to Bollywood. Jab We Met is still my favorite Bollywood film. I look forward to seeing Shahid's newer films, Mausam and Teri Meri Kahaani, which came out after my headlong plunge into Shahid's filmography, but Netflix doesn't have TMK, and gives its availability date as "unknown." Sigh. The reviews for these films have been mixed, too. Sigh again. Anyone know of any other Shahid Kapoor films that I missed?