The story of why I decided to sample 70s Bollywood films is kind of a convoluted one. The song Deewangi Deewangi from Om Shanti Om (which stars Shah Rukh Khan) was featured in the sidebar on Youtube when I was watching some other Bollywood song, and, intrigued, I watched it. It was catchy and fun, but soon became a stream of actor appearances, with people showing up to dance a few steps with Shah Rukh while people cheered. That was fun when I recognized the actor ("Hey! Wasn't she in Life in a Metro?" "Oh look! It's Preity!"), but more often I didn't recognize them. I got curious, however, and looked into the movie. Plenty of people, I came to find, thought it a highly entertaining film, but apparently a lot of the humor in the movie is based on references to 70s Bollywood. Somehow, probably bearing witness to some slight perfectionist tendencies of mine, this became an impetus for me to research the top movies of the 70s in order to track them down and watch them. In other words, a lot of preparation is going into watching Om Shanti Om someday, and I hope it appreciates it!

This is not always easy, I must point out. I love my red envelopes that come in the mail, bearing DVDs to make me happy, but most of the top 70s movies have a wait (short, long, or very long). Evidently, I am not the only one interested in watching important films from that specific decade. Many are on Youtube, but not always subtitled.

Sholay is one I was able to watch on Youtube- with subtitles! According to this article on squidoo.com, Sholay is THE top 70s Bollywood film. The title means "embers." 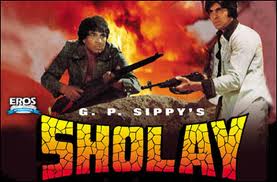 I have to admit this poster didn't make me all that excited to see it. Nevertheless, I ended up being pretty entertained by Sholay. In my usual newbie, naive way, I remarked to myself that it looked a lot like an old Hollywood Western... except it was in India. You may not be surprised to find that I am not the only one to have noticed that- the term for this type of Bollywood film is "Curry Western." (See what they did there?)

The film stars Amitabh Bachchan and Dharmendra as goofy outlaw types, who steal and scoff the law but are loyal, fast friends and generally decent guys (despite the whole being criminals thing). 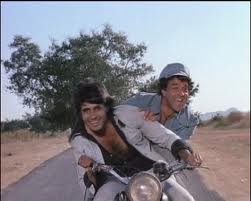 This was the first film I watched that stars Amitabh. I was at least aware that he was a big, big star. It was also my first exposure to Dharmendra. I hadn't heard of him at all. As it turns out, though, he is one of those stars that shows up in the Deewangi song, so I look forward to trying to recognize him when I finally do watch Om Shanti Om. These two make a fun pair, and certainly play off of each other well.

A policeman who once was THIS CLOSE to apprehending this playfully criminal duo, and who ended up impressed with their bravery and decency, tracks them down and wants to hire them to rid his village of a very bad man. I am suddenly picturing "El Guapo" from The Three Amigos, 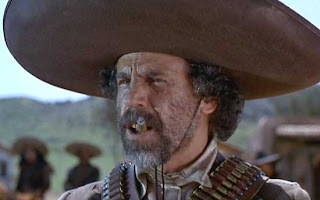 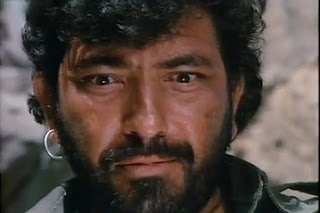 and he is a really nasty piece of work. They didn't shy away from making this guy very, very bad indeed. The actor is Amjad Khan and he knows how to play the bad guy. He has it down cold.

They end up taking the job, and all sorts of drama ensues. Both find love interests in this small village they have been hired to protect. I was interested to find that both of their loves interests were real-life love interests as well, and they are now married to them. Amitabh had married the actress playing his love interest, Jaya Bhaduri, just before filming started. But the story of Dharmendra and Hema Malini, who plays the quirky village girl that his character falls in love with, is just fascinating.

First of all, I was very taken by Hema. She plays a spunky, strong girl, although her character can also be quite naive and gullible. At one point she is required to try to save her love by dancing- it may sound strange, but trust me, it is a fabulous scene- and her determination and strength are as awesome as her dancing. That is actually my favorite part of the movie. 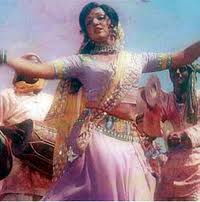 Anyway, I decided to find out who this actress was, and my research led me to find that Hema and Dharmendra fell in love while shooting Sholay. Awww.... AND, he reputedly bribed the lighting techs to mess things up so he would have more time with her doing retakes of a certain scene. How sweet! But, it turns out, he was already married at the time. Urgh. That puts a damper on what was looking like a charming real-life romance. Then things get interesting. According to Hema's biography on IMDB.com, Dharmendra wanted to get a divorce and marry Hema, but couldn't because his wife would not agree to it. But eventually Dharmendra and Hema both converted to Islam and got married anyway. Apparently, and I am still trying to find out more about this because it is so very intriguing and culturally fascinating, there are different laws regarding marriage in India, depending on your religion. Which is a reminder to me that there are certainly a lot of different ways of looking at the world. I wonder what Dharmendra's first wife did then? But I haven't been able to find any information on that. Can anyone point me in the right direction? Fascinating, fascinating stuff!

But back to the actual film. Sholay has action, adventure, humor that I actually found funny (humor can be tricky, cross-culturally), sacrifice, tragedy, and very memorable characters. It also had the most ridiculous climactic combat scene that I have ever seen in any type of cinema. I can't tell you more without being very spoilery, but it is just ludicrous. Shaking my head here.

It didn't ruin it, though. I think, as a Western, non-Hindi-speaking person, Sholay does not have the impact for me that it evidently had in India when it was released. Still a good time, though, and a piece of Bollywood history that I am glad to have seen!