I had a Bollywood wishlist for Christmas, and Santa delivered in the form of an amazon.com gift card (actually, it was from my mom- she's the best!). So I bought and recently finished reading King of Bollywood: Shah Rukh Khan and the Sedutive World of Indian Cinema by Anupama Chopra.

Quite the title, don't you think?

Here is the book: 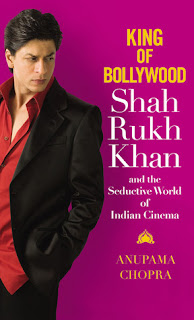 Here is the author: 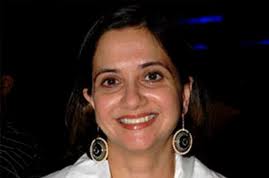 The book is engaging and well-constructed, providing a nice overview of Bollywood by closely following SRK's career and giving the bigger picture that frames it. It was definitely written with the largely uninitiated Western reader in mind: the first time she refers to a person or film, she provides a bit of explanation and/or background, no matter how seminal or famous in the Bollywood world. This is nice for a relative newcomer like myself, and I think anyone with even a passing interest in Bollywood or the phenomenon that is Shah Rukh Khan could enjoy this little book quite a bit. It's also an easy, quick read.

One thing that was a little strange was that occasionally her attitude toward Bollywood seemed dismissive. Here she is, a film critic for an Indian newspaper and is writing a book about Bollywood and its biggest star; clearly, to get to this point she has to have spent a lot of time with Hindi-language cinema and one would assume this began because she liked her subject. But sometimes she seems almost a little embarrassed by her country's biggest film industry. I find that both odd and interesting. Of course, not all of Bollywood is wonderful, but I don't find Hollywood movie enthusiasts or critics, when writing about their subject, finding a need to take a tone that makes it clear that they know that often Hollywood films are quite awful (although, of course, this is perfectly true).

All-in-all, I very much enjoyed the book, and am very keen now to watch some more of SRK's films, despite the fact that Ms. Chopra did not shy away from presenting his warts as well as his charm. She did justice to a fascinating personality.