The Girl With a Curl- Aiyyaa

After watching the song promos for Aiyyaa starring Rani Mukerji I just had to see it! Rani's dancing is so fabulous and fun, and she looked like she was having a blast. Well, Netflix has it on the dreaded "availability unknown" list, and it's not subtitled on YouTube, so I actually bought a copy. 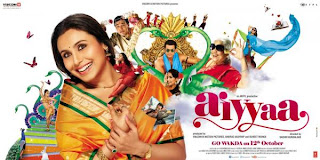 Now, I knew this was a risk, because reviews for Aiyyaa have not been overwhelmingly positive, but I succumbed to the temptation. What came to mind after watching it was a little poem by Henry Wadsworth Longfellow that my mother was fond of reciting:


There was a little girl,
Who had a little curl,
Right in the middle of her forehead.
When she was good,
She was very good indeed,
But when she was bad she was horrid!

That's how I feel about Aiyyaa. The good is so very, very good. So engaging, so fresh! But the bad is squirm-in-your-seat cringe-worthy. Thankfully, I do think there is more of the "very good indeed" than the "horrid," but, yikes, the "horrid" is hard for me to ignore!

Rani's character, Meenaxi, is a delightfully spunky young woman who sometimes lapses into colorful daydreams, usually about being a film star. 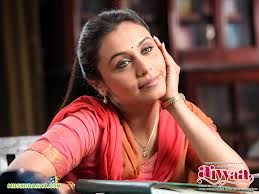 Her real life is not so glamorous, however. Meenaxi's boisterously eccentric family is trying to marry her off, but meanwhile she has become enamored with a brooding hunk of an art student enrolled at the college where she works.

Her family succeeds in finding a match for her, and Meenaxi's never even been able to talk to her love interest, for whose benefit she has been studying Tamil. (I love that! I love languages, and I love people being enthusiastic about languages and wanting a language-enabled connection with other people.) So there is some angst over what she should do, since the guy she has been matched with is a decent, likable fellow. But mostly she just wants a chance to see if she and her dream guy are destined to be together!

What is there to love? First of all, RANI! She is fantastic! Her facial expressions are perfect, her screen presence is riveting, and she looks gorgeous yet like an ordinary girl. Her character is quirky, but still seems like a real person rather than a gimmick (unfortunately, the same cannot be said for every member of the cast).

There is an allusion to the book Alice in Wonderland in the film, and the film sometimes takes on a surreal, Wonderland-like feeling. My favorite is when Meenaxi is following her love-interest through the streets and ends up in a neighborhood unfamiliar to her. She seems flustered by sights and sounds and people she is unaccustomed to, but as the object of her affection calmly walks through everything she follows, almost like Alice down the rabbit hole.


I also loved Meenaxi's crazy family, particularly her goofy, soft-hearted brother, and the way they all related to one another.

And Rani's dancing! FABULOUS! I so wish I could move like she does. 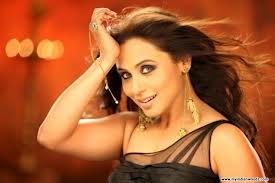 But the storytelling is disjointed and the editing is choppy. Meenaxi's zany family is fun, but the way their zaniness is presented leads to all sorts of set-ups that are never paid off. Meenaxi's coworker is a caricature, and not a terribly funny one at that, although I have to say I was pleased to see the depiction of female friendship.

And the horrid... Rani's delicious dancing is ruined for me by incredible raunchiness. The dance numbers for "Dreamum Wakeupum" and "Aga Bai" in the movie are not the same as the promos. The promos had some suggestive elements, sure, but in the movie we go from playful hinting to spelling it out in spray paint on a ten-foot wall. I get that it is supposed to be humorous but it simply doesn't work. And there is another song near the end (not involving Rani) that is distasteful through-and-through. To give details would be to give spoilers, so all I will say is that, though I am usually of the opinion that the more songs the better, I would happily have foregone that one and wouldn't mind having the memory of it struck from my brain, either.

But Rani! I know nothing of her as a person, have never read or seen an interview, so I won't say that I have fallen into girl-crush territory. However, I do know this: when she makes another movie, I will see it.