The Triumph of Sridevi- English Vinglish

Netflix, you know I love you, but what are you thinking? Why are you not offering the wonderful English Vinglish? Why is not even on your radar, not even under the dreaded "availability unknown" tag?

Well, people, there's always amazon.com, which is how I got English Vinglish as a Christmas present. 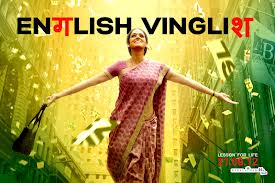 Sometime last year, before English Vinglish's theatrical release, the internet was abuzz with news of a comeback vehicle for Sridevi. Bollywood afficiandados were doing the internet equivalent of excitedly squealing, "SRIDEVI!" Meanwhile, as an enthusiastic newbie, I rejoined with... "Who?"

Well, Sridevi is a star. I say "is," not was, because when you can come back to films after 15 years with a reception and a performance like Sridevi's for English Vinglish, you are definitely and irrevocably a star. When I first heard tell of English Vinglish, I had never seen or heard of Sridevi. After my abortive attempt to watch Chandni, this is the only Sridevi film I have seen all the way through. She. Is. Fantastic. I'm almost tempted to try to finish Chandni for her sake, but I think I'll see if I can find some of her other pictures first, in the hopes the storylines will make me less nauseated.

English Vinglish is the charming, simple story of an Indian housewife, Shashi, who is intelligent and runs her own little business out of her home, making and selling ladoos. (As a side note, after watching this film I very badly wanted a ladoo, despite never having tasted one before. Unfortunately for me, I know of no way to procure one around here.) However, she lacks confidence, and is frequently the butt of insensitive jokes from her husband and obnoxious insults from her daughter, because she can't speak English. Apparently, this is a thing in India, at least in some circles. I won't pretend to fully understand it or all its implications. At any rate, the daughter is truly and hideously awful to her mother. At least Shashi also has an adorable little boy who doesn't treat her badly. 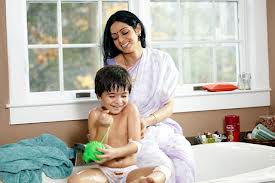 Well, Shashi's niece in New York is getting married, and Shashi travels to the Big Apple for the first time to help with the preparations, with the rest of the family planning to follow closer to time for the actual wedding. With time on her hands during the day, she covertly joins an English class, complete with an international assortment of comic characters, plus a Frenchman (Mehdi Nebbou) who is easy on the eyes and fascinated by Shashi. 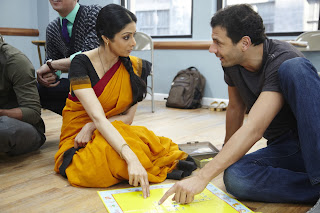 And let me disabuse you now: there is no romance happening here. She is flattered by his attentions, but that is as far as it goes. I, frankly, love this. I love that they are able to make a story about a middle-aged woman looking for something more in her life, and trying to gain confidence and self-respect, and refrain from the cliche of "a sexy man sweeping her off her feet (and a divorce) is what she needs for self-actualization!"
No, Shashi gains confidence as she makes strides toward the goal she has set for herself. 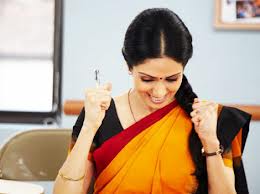 This film is a gem. It reminds me of the wonderful Japanese film Shall We Dance (which was remade into a much lesser film starring Richard Gere and Jennifer Lopez) as a story about reaching a point in your life where you're wondering if what you are is all you ever will be, if how people are used to seeing you is all there is to you, if there is no change or growth left. Shashi's growth and her inner strength are marvelous to watch, and Sridevi, as I think I mentioned, is just amazing and simply stunning. When she's onscreen, you can't look away.

English Vinglish isn't perfect, but it's so large-hearted and winning that it's pretty easy to dismiss some stereotyping and other minor flaws. I really wanted a scene where Shashi tells her daughter, in no uncertain terms, that her behavior is unacceptable, but I guess one can't have everything. Another disappointment for such as I is the lack of big dance numbers (could have had at least one at the wedding!), but on the other hand, it makes for a film that should easily appeal beyond Bollywood fans to anyone without a crippling case of cynicism.

Watch English Vinglish if you can! I'll lend you my copy. 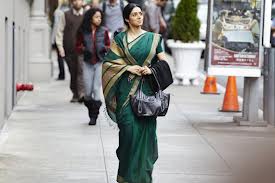