When SRK Won Me Over- Rab Ne Bana Di Jodi

As I mentioned in a previous post, the very famous Dilwale Dulhania Le Jayenge, which launched Shah Rukh Khan's lover boy persona and remains at this writing the longest running movie in Bollywood history, only served to leave me slightly bemused as to the appeal of SRK. The movie was fine and he did have some moments that proved he knew how to turn on lovey-dovey charm, but mostly I spent the film thinking, "Really?" Why, I wondered, has this odd-looking man with his over-the-top "look at me!" acting style won the hearts of fans the world over?

I warmed up to him a little when watching Dil To Pagal Hai (The Heart is Crazy), which is an overblown 90s romance full of cheesiness and angst and fate and love and soul mates and Madhuri Dixit running through verdant green meadows and DANCING and some horrifically ugly dance costumes and I love it. I just do. I've heard this type of Bollywood movie described as "candy floss romance," which didn't mean much to me until I remembered that "candy floss" is the UK English term for cotton candy. It fits perfectly. There is nothing of nutritional value in cotton candy at all, but it certainly tastes delicious! And sometimes you just want to indulge.

I'm sure I will devote an entire blog post to Dil To Pagal Hai eventually, but for now, check out the rain song with all the adorable dancing children (watch the kids in the background closely starting at the 2 minute mark to see one little boy miss his cue in hilarious fashion):


But I still wasn't feeling the magic, although his chemistry with Madhuri Dixit is sizzling (Madhuri herself is fabulous).

Then, one night, I was scrolling through the offerings on Netflix Instant Streaming and came across Rab Ne Bana Di Jodi (A Match Made by God). I have to admit, the fact that it starred Shah Rukh Khan was part of what made me pretty indifferent to watching it at first. But I thought I'd give it a go. 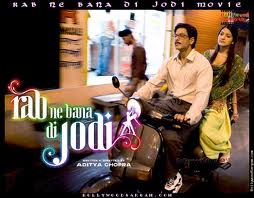 I planned to just watch it for a little while to check it out but watched the whole thing then and there. I suppose you should know before reading on that I cannot with any kind of objectivity speak of this movie. I love it that much. I love it so much that perfectly reasonable criticisms of people who don't like the movie make me irrationally defensive. I love it so much that it almost ties with Jab We Met, which was on such a pinnacle I thought no other Bollywood would touch it. And in that one viewing Shah Rukh Khan wormed his way into my heart and I totally got it. I don't even find him funny-looking anymore, but impishly handsome. That's the power of his charisma.

The story centers on Surinder Sahni, a bespectacled, quiet-spoken and perfectly ordinary middle class man who is invited to attend the wedding of his favorite university professor's daughter, Taani, played by Anushka Sharma. 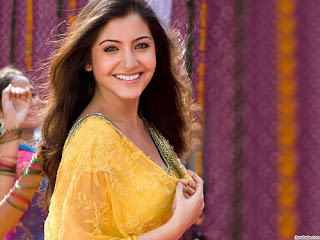 He is charmed by her, and who wouldn't be? In fact he is immediately smitten. But she's about to be married and all, so... short movie, right?

No, of course not. I will warn you that the beginning here, which sets up the premise of the film, is an awful lot to swallow, at least for a Western audience. I always give this warning when recommending the movie, as well as assurances that just rolling with it is worth it! What happens is, as fate would have it, a tragic bus accident means the wedding doesn't happen. Suri's old professor friend, Taani's father, promptly keels over with a heart attack. On his deathbed at the hospital he calls Suri in and begs him to marry Taani so he knows she'll be taken care of after her dies. He begs Taani to marry Suri even though she is grieving, because he doesn't want to leave this world worried about her. Both of them agree, Taani to make her father happy, Suri ostensibly for only the same reason (but we know better).

So now Suri is in the unenviable position of being married to the woman he loves, but without her loving him back, and he is at a loss for how to go about changing this. He ends up having a friend change his look entirely and goes to see her at her dance lesson, but though she ends up seeing him there she doesn't recognize him. 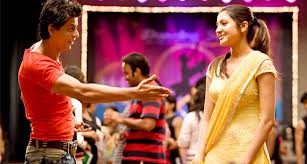 Seeing his chance to spend some time with her with no baggage, he ends up playing a double role: her dance partner, Raj, and her husband, Suri.


A very sweet love story follows. I love it all. I love the music, and the song-and-dance numbers are very entertaining and sometimes touching. There's humor I actually find humorous, and Anushka Sharma's debut performance is quite lovely. Then there is SRK's performance. He is wonderful in this. The man can actually act! His reaction to the decision Taani eventually makes brings tears to my eyes every time. YES, I KNOW I'm sappy! And sure, the movie is kind of sappy. But it is wonderfully heartfelt and sweet. Also engaging, and technically well-made with brilliant colors and beautiful cinematography. And you should watch it. And if you don't like it DON'T TELL ME because I don't want to be disappointed in you. All right, fine, but while you're telling me, just know that I'll figuratively have my fingers in my ears while singing "Tujh Mein Rab Dikhta Hai" at the top of my lungs.