It began like many of my Bollywood love stories. It was just there, on my Netflix screen, suggested for me along with a handful of others for instant streaming. But this one looked a little garish. It looked a little cheap. I didn't yet recognize most of the cast (I think I knew Preity Zinta). I had no idea what the title meant. I passed it over many times. But then one day, and I don't recall why, I went ahead and pushed "play" on Jhoom Barabar Jhoom. 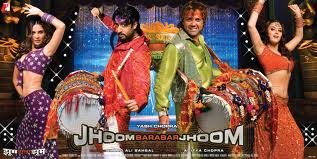 And, of course, I loved it! I laughed out loud. I grinned goofily. I was completely charmed by this completely improbable, silly movie.

I was sad to do a little more research and find that Jhoom Barabar Jhoom flopped in India. Flopped! And sadly, the director, Shaad Ali, has not directed a film since (as of this writing). I hope I will eventually get to see some more from him.

The movie has two beginnings. It actually begins with Amitabh Bachchan, whose role in this movie seems to be something along the lines of a Shakespearean Chorus (of all things), dancing to the very catchy title song in a train station in London with a diverse collection of extras backing him up. I didn't know much about Amitach Bachchan when I saw this film, actually, and was a bit bemused by the old guy in the ridiculous outfit. My 12-year-old later informed me that he thought Amitabh's character looked "really cool," however, so what do I know? And the opening song and dance he heads up is very, very fun.

The story proper (so to speak), begins with Rikki (Abhishek Bachchan) and Alvira (Preity Zinta) meeting in the train station while each is waiting for a delayed train. 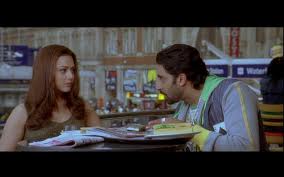 At first they are somewhat antagonistic, but to pass the time they begin to tell each other the romantic stories of how each of them met their significant other. As they get to know one another, it seems they begin to fall for each other. The rest of the film deals in light-hearted manner with how that all pans out.

Yes, it is a silly movie. It also knows that it is a silly movie, and does not take itself seriously. It pokes fun at the fantasies in Bollywood romances and makes shrewd commentary on their improbability, while simultaneously being one itself, in all its improbable glory.

Preity is both caustic and charming, Abhishek knows how to do comedy, and Lara Dutta and Bobby Deol, who play supporting roles, are dead-on and committed to their goofy characters. The music is fabulous and fits in perfectly. An important part of the film involves a dance competition, so we also get to enjoy an abundance of dancing, which is a major plus for me! This film is a rocking good time. Give it a chance! 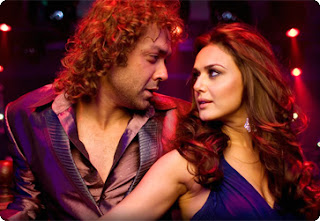 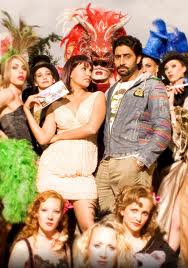