If you are interested in the workings of Hindi cinema, I have an excellent book to recommend to you. The extensively titled Fantasies of a Bollywood Love Thief: Inside the World of Indian Moviemaking by Stephen Alter is a treat. 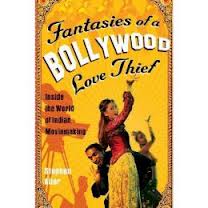 It's the next best thing to being a fly on the wall watching the making of a Bollywood film, from conception to screening.

The author, Stephen Alter, has the perfect credentials to take on this project. He speaks Hindi, having been born and raised in India, the son of missionaries. He also has a cousin, Tom Alter, similarly born and raised in India and now a naturalized Indian citizen, who works as an actor in Bollywood. With this competence and connection, he is able to take us on a fabulous journey through the making of Vishal Bhardwaj's refashioning of Othello, Omkara, which, incidentally, is among my favorite Bollywood films. It's also an excellent choice, being a re-telling of such a well-known work that spoilers needn't be an issue.

Alter takes us from brainstorming with Bhardwaj and some of his friends, to pitching the script to Ajay Devgan (interestingly, it seems you can't often just send a script to a Bollywood star, you have to go pitch it to them), to the traditional ceremony that accompanies the first take, and on throughout each step for making the movie. The reader gets to witness the brutally honest debates over actors' talents that accompany casting pow-wows, see how the actors behave between takes, and observe all the work involved in putting an item number together.

To further enhance the fun, the chapters detailing Alter's observation of the process of making Omkara are interspersed with delightful chapters in which he highlights different industry players whom he was able to interview, from directors like Madhur Bhandarkar and actors like Dev Anand, to an acclaimed lyricist, to marketers and technicians.

Honestly, with his insider status and language abilities, Alter probably would have given us a book worth reading even if he wasn't much of a writer. As it is, his credentials include several other works both non-fiction and fiction, and a highly successful stint teaching writing at MIT. The writing is evocative and excellent and book is structured skillfully. It's also just all kinds of fun to read. I recommend it unreservedly!