So. I watched  Baazigar, the 1993 movie that was a breakthrough role for Shah Rukh Khan. 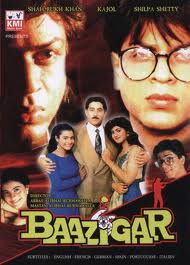 It's truly bizarre.Consider the following images: 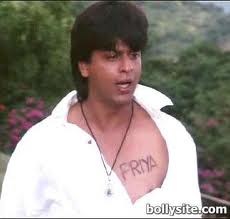 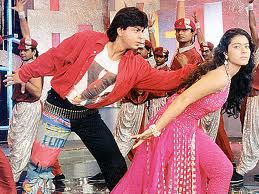 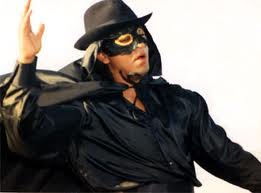 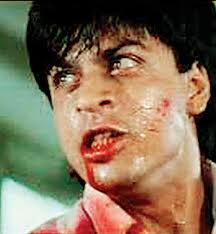 All in one film! Bollywood Zorro is particularly great, isn't it?

This is a wild trip of a film, but very entertaining and actually quite well-written. It is a thriller, but pretends it isn't for a little while.

In the very beginning, you know it's not all sweetness and light. A young boy runs through the rain to find a doctor for his mother. We learn she has had some sort of breakdown due to an undisclosed "setback." We don't know where his father might be. Then we see a montage of the boy struggling to support and care for his mother, until eventually he grows into Shah Rukh Khan. (Incidentally, they did a great job finding a boy who looks like SRK, and the boy turned out a great performance.)

The film thereupon mostly masquerades as a typical Bollywood romance for awhile. SRK goes to the city to get a job, leaving his mother in a family friend's care. He has a girlfriend and sings happy Bollywood love songs with her. They are keeping their relationship secret for fear her father will not approve. All of this is, of course, well-treaded Bollywood ground. 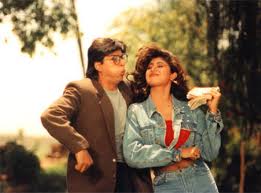 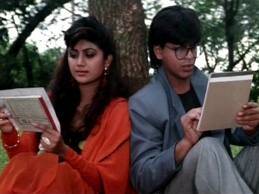 There are some continuing hints that all is not what it seems. An example is the occasional creepy music. Still, when the monumental twist comes, it's a big shock. A very big shock. A sincerely shocking shock. A... ok, I actually knew it was coming because Anupama Chopra discusses this film in her biography of SRK (which I reviewed here), and it STILL shocked me. I imagine Indian theaters when this was first released must have been filled, at this particular point in the film, with the thunderous sound of many jaws hitting the floor.

SRK is riveting in this. True, part of that is just the way the role is written, since it is such a surprising role, but he also completely commits to his bizarre character. He gleefully embraces the crazy, and the result is something that is hard to look away from. It's a very emotionally compelling performance. The rest of the cast is quite good as well. Kajol really impressed me, although I did think it was too bad that her character dwindled from strong and determined to crying and standing by watching the climax. Of course, that's not really her fault. Still, the script is strong-- surprisingly so, even. For example, I have grown used to the silly comical subplots that crop up occasionally in Bollywood films, especially older ones, and I no longer expect them to make any sense or have anything to do with the main story line. Here there are comical bits involving a household servant who keeps causing trouble by being quite unable to remember even the simplest of things. Imagine my surprise when this is actually put to the service of the plot, and helps move the main story forward! It was nice to see.

The songs are a bit of a mixed bag (and the costumes are, ahem, really something), but often enjoyable. In the version I watched they were not subtitled, however, so I only caught words here and there. I find that very annoying, by the way. If I need the subtitles, why wouldn't I also need them for the songs? I don't understand why they are left off sometimes.

Back to Baazigar-- overall, this a gripping, fascinating film. The wild ride culminates in a very violent, bloody ending, though, so be aware of that before proceeding!
Posted by Annie at 8:31 AM