I had already watched Main Hoon Na and loved it. Last night I watched Farah Khan's Om Shanti Om and laughed so hard my long-suffering husband could hear me from across the house where, eschewing Bollywood, he was watching his own shows via Hulu on his laptop. 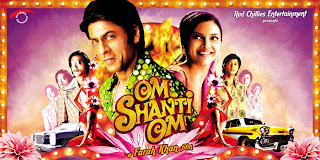 Farah, I think I love you. Both Main Hoon Na and Om Shanti Om parody and poke fun at Bollywood, but they do it with loving and large-hearted humor. I think people underestimate the skill this takes. Beyond the fact that good comedy is always a lot harder to pull off than it looks, it is particularly difficult to satirize or parody without coming off as a bit spiteful or, at least, condescending in a "we see this is funny because we're so above it ourselves" kind of way. Then when such a film goes ahead and uses the same plot devices, it comes off as stupid pandering (I'm looking at you, I Hate Luv Storys!).  Main Hoon Na and Om Shanti Om, however, avoid this completely. Instead, they warmly embrace what they are mocking. "Look at what we love!" they seem to say, "Isn't it silly? Isn't it funny how much we love this?"

In the beginning of Om Shanti Om, Shah Rukh Khan plays a bit-part Bollywood actor in the 70s named Om, who dreams of making it big and is madly in love with the star heroine, Shanti, played by Deepika Padukone. After saving her from an on-set fire gone out of control, they spend some time together and he nurtures hopes of winning her love. However, things take a turn for the tragic, and she is murdered and he dies trying to save her. He is immediately reincarnated as the son of an industry big-wig, also named Om, and the story picks up 30 years later, when he is just as big a Bollywood star as his past incarnation ever dreamed of being. Of course, eventually things awaken memories of his past life, and he becomes determined to obtain justice for Shanti's murder... and maybe find his love, reincarnated as he was. 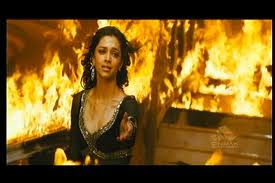 This was also my first Bollywood film involving reincarnation as a plot device, and it makes me want to check out what other films have done with it. I don't believe in it in the slightest, but it makes for a fun and interesting way to frame a story. I really felt for Shah Rukh's first character's mother, who could recognize the reincarnated SRK as her son though at first he had no memory of it. Besides, the role was filled by Kirron Kher, whom I adore. She is fantastic, and probably my favorite Bollywood "mother."

Deepika Padukone is a surprising delight as Shanti. Apparently, I judged her too quickly by her performance in Love Aaj Kal (bland bordering on boring) and her item number turn in Billu Barber (stiff). Here she demonstrates good range and an ability both to charm and to turn vulnerable. I am now more inclined to look into more of her movies (but not Cocktail, having sworn off any more films with Saif Ali Khan as a smarmy lead romantic hero).

And speaking of item numbers, the brilliant "Dard E Disco" in Om Shanti Om celebrates their appeal and absurdity wonderfully. "We need an item number or this film will flop!" present-day Om declares to the director of a film he's working on. Thus we get a shirtless, six-packed Shah Rukh dancing with beautiful women in a routine that is completely separate from any plot (in the main film OR the film-within-a-film) and that involves him being regularly doused with water. Yup, that'll do it. 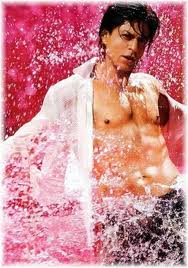 Simply put, I had a wonderful time watching this movie. The story intrigued me even separately from all the laugh-out-loud humor, and I never felt it dragged (ok, the "Deewangi Deewangi" song with all the cameo appearances by Bollywood personalities went a bit long, but it's catchy!). The movie is, indeed, chock-full of references and inside jokes. Which means I probably wouldn't recommend it as a very first Bollywood film. Even a handful of Bollywood movies as background will most likely ensure plenty of laughs, though. I laughed until my stomach hurt, but I probably didn't get half of the humor, which, delightfully, means that this is a film that will likely get even funnier for me as time goes on!